Long time no see! Some news since the last update:

After our tour in January we decided it was time to update our setlist, so we went hunting the right inspiration. Simon walked 180 kilometers to his little cottage outside of Bollnäs to chop wood. Daniel hanged his axe (his Fender jazz bass) on the wall to spend time with old Betty (his upright bass). Ante cut his hair, put on his dress suit and played the triangle in the orchestra. I, me, myself…did what every clever person would have done, I went into hibernation. Well, that isn’t the real truth…in fact Ante didn’t cut his hair!
Anyway, after coming in the right mood we got together and wrote some really good stuff. At this time there are several smooking hot new songs on our setlist!
We thank Simon Reinikainen from the great band Fristad for filling in on the vocals when Therés wasn’t available. We also wrote some tunes together and made a gig at the cosy festival, Ingbofestivalen. Simon really did a great job and we had a lot of fun. 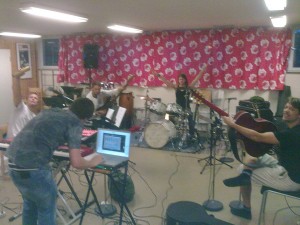 Last week we performed at the Uppsala International Guitar Festival. Which was a kind of experience in it´s own way. Therés was unable to attend so we had a substitute, so far so good. But when I woke up in the morning of the concert day I got a message from Errka, our organ player, telling he was sick in pneumonia…well, I have to admit I became…a bit distressed. After some phone calls very fortunately Andreas Hellkvist came to rescue!
Many thanks to Lovisa Hellsten who did a great job learning all songs, rehersing and finally performing with us! And many thanks to Andreas Hellkvist who did a great job in not rehersing, not learning any songs but playing with us nevertheless. I don´t think I need to say that Andreas did a glorius job on stage, which Lovisa did as well, and we had a great time together.
Thanks to all of you who came to see us at Ingbofestivalen and Uppsala International Guitar Festival! We hope that you enjoyed it as much as we, it was a joy playing for you.
Finally, we have a lot of exciting news going on and will come back to you with an update rather in the near future. Please stay tuned, talk to you soon…
/Gabbi
This is what a rockstar looks like when he’s sleeping. 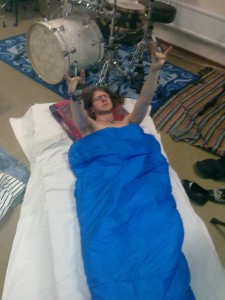