Tour premiére!
We’re sitting in the tour bus and have just finnished our first meal for today. We have a 10 hour trip to Luleå ahead of us…the time is now 00.00 Friday.
We had our tour premiére in Stockholm at Sweden Prog Fest a few hours ago and it was a pretty rough start…we didn’t really get a soundcheck because everything was delayed and we didn’t have time to eat anything. It was just to get on stage immediately. But as soon as we started to play, everything was as it should be – MAD. It was a really great atmosphere in the concert hall and it was a blast to play for you! Thanks to everyone who was there supporting us. 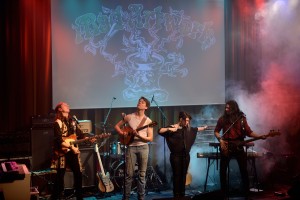 Simon is driving the bus and the rest of us are watching a funny movie, except for Joel who is composing something on his computer and me who is writing this…and now when I look back in the bus I see Ante and Malin sleeping…but where is Daniel?
See you tomorrow in Luleå!
Day II – Luleå
After a few hours of sleep, we were ready to rock in Luleå. Thank you all, what a great night! A special thanks to Hasse who helped us during the evening and to Angelica & Elin who was running around the stage taking photos. This photo is not taken by Angelica or Elin…it’s taken by Fredrik during our soundcheck, lucky us he’s a better sound engineer than a photographer. 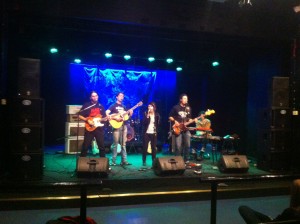 When we started to unload the bus we found Daniel sitting inside the tailgate together with the rest of the gear…he didn’t say much.
It’s finally time for us to sleep and tomorrow we’ll have a day off. See you on Monday in Dalkarlså.
/Gabbi